The short, proud warrior was so involved with the young woman that he was startled when the attack came. But it took him only a moment to recover. He nodded when the two guards whisked the young woman away. And then he went to make his stand alongside two Edgewherean soldiers and a desert warrior. The pirates learned quickly that this small band of fighters was to be dealt with carefully.

Shadowwalker fought with savage fury against the attackers. He and the other warriors finally drove the pirates off the ferry’s deck. The brigands left behind twelve dead on the ship’s deck or floating in the water.

As the last of the pirates scrambled for their small, fast warship, Shadowwalker laughed and yelled in victory. The three other warriors joined in. The desert dweller turned his back to the enemy, bent slightly and whipped up the back of his long tunic, exposing his buttocks to the pirates in derision. 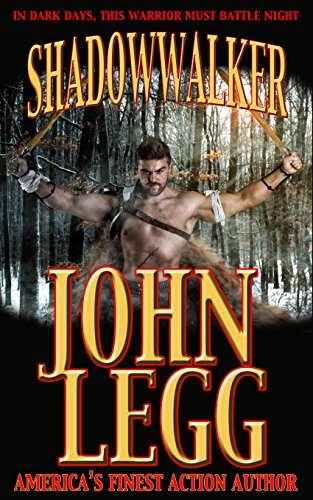 Shadowwalker suddenly became aware of water slopping over his boots, and he realized the pirates had done more damage than he had thought. Slowly he turned, taking in the savagery that had been wrought on this small craft. The water covering the insteps of his boots was dark with blood. With a sinking feeling, he went in search of the maiden, whose name he had not learned, he now realized.

He found her below the top level, in the dark, dank innards of the craft. She was behind a stack of bales of goods and supplies. Her gown, which had once been white and had flowed regally over her slim, sculpted body, was torn away from her front. The tattered remains of the dress were saturated with blood and water.

Her small, pointed breasts were begrimed by foul hands and covered with bruises. She had been ravaged before one of the pirates had ripped open her belly with a grappling hook.

She clung to life by a hair’s breadth. Shadowwalker felt her heart fluttering under her breast and could see agony reflected in her gentle blue eyes. The bodies of her two guards lay nearby, but they had not gone peacefully — half a dozen pirate corpses surrounded the two.

Shadowwalker didn’t know what to do about the woman. He could not help her——no one could help her now——and he was afraid to even move her. With a gentle finger, he brushed away the hairs that had become pasted to her forehead, and then ran the digit down her soft, pale cheek.

The woman licked her lips and then spoke faintly. “Kayela,” she said. “You must find Kayela.”

“Who?” Shadowwalker strained to hear.

Shadowwalker shook his head sadly, certain the woman was delirious and speaking of childhood dreams and visions. Faeries, he thought, what a foolish notion. There were no such things. Everyone knew that. The ancient sorcerers had proved it.

The woman moaned and struggled to rise despite her ghastly wound. With all her fast-waning strength, she grabbed Shadowwalker’s shirt and pulled herself up a little more. “You must find her,” she said quite desperately.

“How can I find such a thing?” the warrior asked, doubting the woman’s sanity.

“Are you such a barbarian that you’d let a faerie die?” she demanded.

“Where is she?” Shadowwalker asked, trying to put some life and interest in his voice. He did not want her to strain any more, and he was determined to humor her to make her final minutes as easy on her as he could.

“She was with me all the time we talked.”

“Of course not. Only I could see her.”

“Oh, by all the demons,” he muttered. All he had wanted was a little pleasure with this beautiful young woman; now he had to squat here and listen to her ravings.

The woman’s head sank back, and her eyes closed; her breathing became more labored.

It would be over for her soon, Shadowwalker knew. “What’s your name?” he asked hurriedly, not really expecting an answer.

But she did. Her voice was even, but as faint as the sound of a butterfly’s wings. He had to place his ear almost on her lips to hear her. “Ariastra,” she breathed. She whimpered a few times and tears squeezed past her tightly closed lids. Within moments death took her.

Shadowwalker rose and found an old, long cloak that wasn’t too filthy. He wrapped Ariastra’s body in it. Cradling the fragile corpse in his arms, he went back to the deck, where he stood, feet planted wide, watching for the first sign of Lorn’s shoreline.

Then he heard another sound. At first he thought it was simply a seabird, but it soon became apparent that it was a voice calling for help, ever so softly.