Squire sat on a blanket facing the east. He could just see the beginnings of dawn rising far off, that first tinge of pink on the horizon. Hannah and Train walked up quietly and sat beside him, one to a side. Behind them, the rest of the camp was beginning to come awake, the sounds of it wafting over the three.

Squire had been up early, well before the dawn, as he usually was. With the warm, clear nights, he and Star Path were sleeping without a tipi. She woke with him.

Soon, Li’l Jim, Peters, and Bellows arrived and took places on the ground. They all watched the rising dawn. 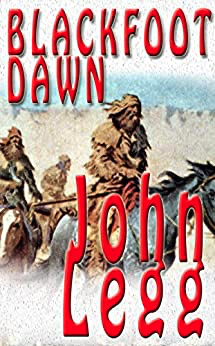 Star Path had made him some coffee, sweetening it with the last few sprinkles of sugar in the packs. Then she had set meat to roasting. He had finished eating not long ago and walked just out beyond the edge of the trees and spread his blanket. He sat, watching and waiting. He was still doing so when his two young friends joined him.

“He’ll live,” Bellows said wryly. He didn’t really expect any of them to last more than a few hours longer, at most.

Squire almost smiled. “Them red bastards’ll be comin’’ for us today, sure as shit,” he said. He sounded almost wistful, as if he couldn’t wait for it to happen. “Aye, lad. And they won’t be none too goddamn friendly about it neither.”

“Shit, we’ll turn them red sons a bitches back again, just like we did yesterday,” Li’l Jim said with his usual cockiness.

“That’d be mighty unlikely, I be thinkin’,” Squire said quietly.

“Huh?” Li’l Jim asked, looking sharply over at him.

Squire almost smiled. “Them sons a bitches’ll be throwin’ all they got at us this day, lad. Waugh! They’re madder’n a griz with his balls in a knot after what we did to ’em yesterday. They’ll not be thinkin’ kind thoughts about us.”

“The hell with ’em, goddammit,” Li’l Jim growled. “The first one of them red devils comes at us, I’ll sprinkle him with a little death dust.” He grinned ferociously. “And a goddamn lead pill waits for them that comes after.”

Squire laughed. He had no fear of dying. Indeed, he found it hard to conceive of such a thing, even when the odds were so high against him and his tough little band.

“Jist be sure you don’t miss with them lead pills, boy,” Peters said with a harsh chuckle.

“Shit, I’ll outshoot you and any goddamn body else, and you goddamn well know…”

The Blackfeet had ridden into sight, still a ways off. They made a frighteningly compelling sight in their war bonnets and paint, with their painted horses.

“Come on, ye red devils,” Squire muttered. His hands twitched, anticipating the action. He looked at each of his friends. One by one, he clapped them on the shoulder and nodded. They were good people, all of them, and he was proud to call them friends. It wouldn’t do, though, to tell them so. The gesture would suffice, especially when the smile was returned by each.

Then they faded back into the trees and brush, heading for the places they had held yesterday.

Star Path was waiting for Squire with his heavy Hawken rifle in her hands. As he took it, his hand brushed hers, and he smiled. He was pleased with the Sioux woman named Star Path, always had been. She was nowhere near as slim, trim, and youthfully attractive as Sings Pretty had been, but Squire still found her quite appealing. He didn’t understand it; he just accepted it.

Squire reached out his huge right paw. His hand could have covered her whole face, but he instead softly cupped Star Path’s chin and left cheek. It might have seemed a strangely gentle gesture for a man so large and ferocious. But to those who knew L’on Farouche, it was entirely in character.

The couple said nothing to each other. They knew their duties and places. Carrying her trade rifle, Star Path headed toward where Bellows and Ransom, with the help of the other Indian women, would be keeping the horses and mules. Star Path would watch over Colonel Melton, protecting the agony- filled Melton to her last breath, if need be.

Rising Sun was already at Melton’s side. She looked worried about her man. Star Path smiled reassuringly at her, and then at the Colonel. He returned it; Rising Sun tried but could not.

Squire settled in behind a stunted cedar. It would offer him some protection, but it was not so big a tree as to get in his way. He checked his rifle, then his shooting supplies, then he settled in to wait.

Not far away, Train and Hannah unabashedly hugged briefly before seeing to their weapons. Train felt funny inside. It was something he was becoming familiar with. He worried about Hannah and wanted to protect her. Such a thing seemed instinctive to him. At the same time, he knew that she was as capable as he in taking care of herself. She was nearly his equal with rifle or pistol, and far better with a knife when the fighting got close. She was not as strong as he was, seeing as how she was so much smaller, but she made up for much of that with speed and plain ferocity.

They stared out across the barren expanse of broken land, trying to blot out the fear and anticipation.

The Blackfeet presented an awesome and frightening spectacle as they spread out. Were it not for the small, swift-running creek with the marshy banks, the small island of mountain men would have been surrounded by the Indians.

The Blackfeet moved slowly forward in their arc. Their lances and guns gleamed in the glow of the new morning sun.

“Yeah, Nathaniel?” There was no fear in the young man’s voice. In only a year he had faced more danger than most men faced in their lifetimes.

“Ye see that red devil there on the big skewbald horse?”

“The one with the buffler horn headdress settin’ out there near the middle?”

Li’l Jim smiled a little. He had a streak of cruelty in him that burst forth only occasionally, but it was there. He lifted the old Hawken rifle and sighted down the long barrel.

Everyone knew the act would mean nothing in the overall scheme of things. But they also knew that it would make a statement that they were not about to sit here and be overrun by the warriors.

Li’l Jim fired, and the warrior spilled off his pony. The animal bolted and raced off, heading toward the white camp. The mountain men ignored the horse, especially since the Blackfeet seemed to use the death as a signal.

There were a few moments of silence as the sound of the gunshot faded into the morning’s warmth. Then the warriors suddenly charged. They came quietly at first, and slowly. But they picked up speed.