A somber group of men gathered the next morning around an area they had just cleared. At one side of the makeshift arena stood Maxwell; across from him stood Shawcross. The former seemed at ease, relaxed, confident; the latter was tense, angry and seemed to be growling to himself.

Elgood stepped into the center of the open space and looked from one combatant to another. “You boys still aim to follow through on this foolishment?” he asked.

Maxwell shrugged. He didn’t care much either way.

Shawcross, however, was firm. “Goddamn right I want to go through with it. It’s long past time that mouthy bastard got what was comin’ to him.”

“You realize, don’t you, Judd, that it might be you who gets his comeuppance?” Elgood noted. 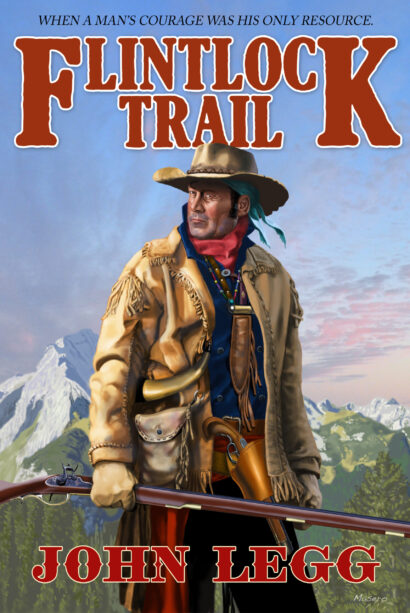 Elgood shook his head at the man’s arrogance and obstinacy. Shawcross was going to get himself killed for no good reason. Elgood sighed. Well, the decision was out of his hands now. Actually, as the captain of this expedition, he could order them not to go through with this. But that, he knew, would do nothing but delay the inevitable. At least this way it would be as fair as he could make it. He hated to lose either man, but Elgood had, over the past couple of years, become so troublesome that Elgood almost hoped it was the crusty trapper who came out the worse for this fight. Not that Elgood figured Shawcross stood much of a chance. There was something about Maxwell that made Elgood think the black was a lot more formidable than he seemed.

“Anything either of you want to say before we get this fracas going?” Elgood asked.

Each combatant shook his head. Maxwell pulled his old cloth shirt off and dropped it to the ground. A nasty, massive scar disfigured Maxwell’s one shoulder.

Shawcross spat, and then followed suit, not wanting to be outshone in showing off his musculature. He didn’t realize that his pasty whiteness looked sickly and pale when looked at against Maxwell’s light caramel coloring.

“Then,” Elgood said with reluctance, “you best commence.” He stepped back, until he was just one of the men in the crowd.

As Maxwell and Shawcross moved warily toward each other, a man named Pete Lepari shouted, “I got two dollars cash money says the Negro feller wins. Any takers?”

There were plenty, and within a heartbeat, men were wagering whatever small bits of cash they had, knives, small personal items, whatever they could come up with that had any value at all. They had often played cards on the journey, but this, this was real wagering, and something new besides.

The sudden swell of noise startled both opponents, who stopped and looked around at the wagering men in surprise. Then they shrugged, and went back to approaching each other, minds back on the work at hand. Both ignored the shouting and yelling that continued, once the bets were placed, as the men cheered for the combatant they had wagered on.

Maxwell had long ago sized up Judd Shawcross as a bully and a blowhard, someone who intimidated people through a fierce-looking exterior, not through his skill as a brawler. So Maxwell was not all that worried about Shawcross, but he remained wary. He knew that if he let down his guard for even a second, a cunning man like Shawcross would be all over him in a moment.

Maxwell took the initiative and charged. He figured that he could get this over with in a hurry if he made Shawcross fight on his terms. Shawcross was a little surprised, having thought that Maxwell would just wait for him to attack. But he recovered well, he thought, and blocked the looping left fist Maxwell had launched at his head.

In doing so, however, Shawcross missed Maxwell’s booted foot, which crushed his genitals.

Shawcross howled, and bent in half, clutching at his mashed testicles. He sucked in great draughts of breath, trying to ease the agony.

“Dumb bastard,” Maxwell said, shaking his head a little. He stepped up a bit and then slammed his locked fists down on the back of Shawcross’s neck. The trapper crumpled. Maxwell moved in and began battering Shawcross, punching and kicking him.

Finally Maxwell stepped back, giving Shawcross a breather. “’Ave you ’ad enough, monsieur?” he asked haughtily. “Are you ready to been a reasonable man, or is zat too much for an imbécile like you, eh?”

Shawcross got groggily to his feet. He was woozy, and he felt as if his body was in flames from all the aches he had suffered at Maxwell’s hands. But now that he was up and had had a few minutes relief from the thumping, he was beginning to feel a little better. At least enough to be able to fight back some. If he could get a few more moments to recover, he figured he would be all right.

“What’s zis?” Maxwell said mockingly. “Ze great Judd Shawcross has not’ing to said? Ze big blowhard who is always telling everybody what un grand homme  ’e is can’t found any words?” His contempt for Shawcross was quite obvious.

Maxwell’s scornful little speech gave Shawcross the few moments more of respite that he had wanted. He drew in a deep breath and let it out slowly. “Piss on you, Maxwell, you mongrel son of a bitch.” Shawcross drew his knife and suddenly came at Maxwell.

Maxwell grabbed the wrist of Shawcross’s knife hand in both his hands and twisted his foe’s arm down, around and up along the back. There he found it easy to pluck the blade from Shawcross’s fingers. “You are too stupid to continue living, monsieur,” Maxwell said harshly into Shawcross’s ear. “Much too stupid.” Without remorse or hesitation, Maxwell ran the blade of Shawcross’s own knife against Shawcross’s throat, opening up the carotid arteries.

When Shawcross had finished gurgling, Maxwell dropped the body to the ground, and then dropped the knife next to the corpse.

Men cheered or groaned as they collected or paid their bets. Those who had favored Shawcross were shocked, not so much that Shawcross had lost, nor even that he had lost to a black man, but that it was over in roughly a minute, from start to finish, including the unmerciful beating Maxwell had given his opponent.

Elgood walked up to Maxwell. He, too, was a little surprised at the swiftness and brutality of Maxwell’s attack. “Goddamn, boy,” he said, “that was some exhibition you put on there, son.”

Maxwell shrugged. He felt no regret in having killed Shawcross, but he was not a man who got any enjoyment out of another man’s demise, especially when he had caused it.

Elgood had hoped Maxwell would open up a little and talk about himself, but that apparently was not going to happen. He hesitated, then made his decision. “We’re short a man now,” he said quietly, “and a brigade leader to boot.” Then he grinned harshly at Maxwell. “But what the hell, boy, since it was you who went and killed that crusty bastard, you can just replace him as a brigade leader.”

It was Maxwell’s turn to be shocked. He wasn’t sure he had heard right and didn’t know that he wanted to hear it right. “I don’ know ’ow to did any trapping,” he said tentatively.

“Then you’ll just have to learn, won’t you, son?” Elgood responded, almost enjoying the discomfort on Maxwell’s face. “And goddamn fast, too, I’m sayin’ to you.”