Tanner saw a slight movement ahead in the snow and brought his wagon to a halt. When he realized it was a person, not an animal, he drove closer, stopped again, and jumped down from the seat. He knelt next to the person—he learned it was a woman when he rolled her onto her back. She wore no blanket or other outer garment against the elements, being clad only in her buckskin dress. She was nearly frozen. He stood and looked around through the lightly falling snow. There was no indication of anyone else in the area. “Where the hell did you come from, woman?” he muttered. He shrugged. He didn’t know what to do with her, but he could not just leave her here to die, even if she was an Indian.

He carefully picked her up and set her in the wagon bed, then stood thinking. Finally, he shrugged, took off his heavy bearskin coat, and tucked it around her, barely leaving her face uncovered so she could breathe. He donned the town coat he kept in a box behind the seat and climbed aboard. “Let’s go, mule,” he said, snapping the reins. “She needs shelter, and this coat won’t keep me warm for long.” 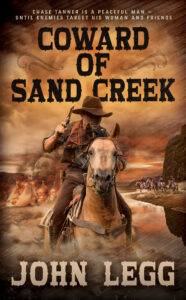 Three hours later, he pulled up in front of his small cabin a couple of miles outside Kiowa. Though he was shivering, he brought the woman in and deposited her on his creaky bed. He covered her with blankets, took off his town coat, put on his bearskin coat, and quickly got a fire going in the stove. Despite being tired and cold, he headed outside to unhitch the wagon, tend to the mule, and put it inside the barn, making sure it and his horse had hay and water.

But his work was not yet done. Inside, he removed his coat, hung it on a peg next to the door, and heated up some frozen buffalo stew he had brought back from town before he left on his latest rounds. Finally, he plunked his tired body in a chair and ate hungrily while wondering about the woman and what to do with her.

Tanner was sitting at his table when a gasp from the woman made him spin in his chair. He rose and hurried to the bed. The woman gasped again, this time in fear when she saw a white man looming over her.

“I ain’t gonna hurt you, Miss,” he said hastily. It did not calm her. “Are you hungry?” The only response he got was wide-eyed fright. “Do you speak English?” Again, he got no response. With a sigh, he went to the fire, filled a bowl with stew, and went back to the bed, where the woman still cowered. He knelt and directed a spoonful toward her mouth. She shrank back, getting as far from him as she could.

“I’m not gonna hurt you,” he repeated. “This is good. It’ll make you feel better.” He ate the spoonful, then another. “See?” He waited silently, trying to suppress his frustration.

“You’re safe here,” he said quietly after a minute or two. “You’re warm and there’s food, and I’m not gonna hurt you or even touch you. Now, come on and eat a little.”

With frightened eyes, she tentatively leaned forward and let him feed her the spoonful of stew.

“Good?” he asked with a smile.

She said nothing but allowed him to feed her more. She relaxed a little, but she was still wary. “Want some coffee?” he asked after a few minutes.

He had to be satisfied with a cautious nod. He handed her the bowl and went to the fireplace, then filled a tin mug with coffee, added a dose of sugar, and returned to the bedside. He handed her the cup and took the empty bowl. “Do you speak English?” he asked again.

She offered a short nod.

“Cloud Dancer,” she said softly, her voice quavering with lingering fear as well as the cold that still resided deep inside her.

“Pretty name. Fitting for a pretty girl. You Cheyenne or Arapaho?”

“Cheyenne.” She burrowed a little deeper into the blankets, shivering.

“I found you half-froze in the snow a few hours away and brought you here. Your clothes were icy, and now they’re wet. You really should get them off and let ‘em dry.”

Horror leaped onto her face.

“I ain’t gonna look. I’ll go outside and see to the animals, maybe get some more wood for the fire while you take those wet clothes off. You wrap yourself up good in these blankets. I got an old shirt and pair of pants over there if you want to put those on. I’ll knock before I come back in and wait for you to say you’re ready. That sound all right?”

“You can’t stay in these wet clothes. You’ll get mighty sick. I’ll put up some rope so you can hang them near the stove.”

She still looked uncertain and scared. He took the empty coffee cup from her and placed it on the table. He got an old shirt and trousers and put them on the table as well. Then he hung some rope near the fire. “I’m going out now. You’ll be all right. Just hang your dress and leggings, if you’re wearing ‘em, near the fire.” He pulled on his bearskin coat, and with a shrug, he went outside.

He made sure the horse and mule were warm enough in the barn, gathered some firewood from the stack, and carried it to the cabin, where he placed it just to the left of the door and covered it with a canvas tarp. He had taken his time at it, but he gave her more time. Watching the falling snow, he wondered again how the woman had come to be where she was. Then, with a sigh, he knocked on the door. He got no answer, so he tried again. Again, there was no answer. Reluctantly he edged the door open. He waited before entering, surveying the room. He could not see her. His clothes were gone from the table and hers were hanging on the rope, but she was not in the bed. He smiled. “I don’t think it’s a good idea to attack me, Cloud Dancer. One of us might get hurt. Now toss away whatever you’re planning to hit me with and come on out where I can see you.”

A log landed with a thump a few feet from the door, then Cloud Dancer came into view. She was dressed in his clothes, the pants held up by a piece of rope, the shirt hanging to her knees. Tanner couldn’t help but laugh. “You are a sight, Cloud Dancer.” He chuckled as he walked inside, then grew more solemn. “You want to talk or get some more sleep?”

“Need sleep.” The voice was quiet, but it could not hide the fear.

“You needn’t worry. Go on to the bed.” He blew out the candles, then settled on the floor, pulling the heavy coat over him and resting his head on his saddle. He was out quickly, but he slept lightly.

In the morning, Tanner stoked the fire, made bacon, and heated coffee. He was sitting at the table with some of each when the aroma woke Cloud Dancer. She looked over at him with a combination of hunger and fear. “There’s plenty,” Tanner said with a smile. “I ain’t feeding you this morning. You can feed yourself. Plate and cup are over next to the stove.”

The woman rose and cautiously headed to the stove, giving the man as wide a berth as she could. She got food and coffee and hurried back to the bed, where she ate hungrily.

“Good. I reckon your clothes are dry by now. Soon’s I finish eatin’, I’ll go outside for a bit so you can get changed.”

Soon after, Tanner donned his coat and left. He made sure the animals had feed and brought more firewood to the cabin. Thinking the Cheyenne should not have taken that long to get ready, he knocked on the door.

“All right to come in.” The woman’s voice came from inside.

He opened the door carefully, but the woman was sitting at the table with a cup of coffee in front of her. Tanner joined her. “What happened, Cloud Dancer?”

She said nothing for a little while, which had Tanner thinking she wasn’t going to talk about it. Then she said, “Family was travelin’ back to village after visiting friends. White men attacked us. Killed everyone, I think, except me. I ran.”

“Not sure they followed, but snow was fallin’ hard. Covered tracks fast.

“Makes sense. The snow was coming down pretty heavy there for a while. But what about a blanket or something? You had none when I found you.”

“I thought men were chasin’ me. After runnin’ for some time, I fell. When I got back up, the wind blew my blanket away. I thought I heard men followin’, so I ran again.”

“I’m sorry for you, Cloud Dancer. No one should go through that.”

“You’re maybe the only white man who feels that way.”

“Whatever you want.” It was said with resignation.

“If you think I’ll take advantage of you, don’t worry. I won’t do that.”

“You are a strange white man.”

Tanner shrugged. “Not my way to take advantage of any woman. Well, you can stay here a few days, let yourself recover a bit more, then we can figure out what to do. I expect you’d like to return to your people.”

“Yes,” she said, her voice wistful.

“I don’t know how we could arrange that, but I’ll give it some thought.”

The pounding on the door startled Tanner. “Over there, Cloud,” Tanner ordered in a low voice, pointing to the front corner to the left of the door. Unless the door was fully open, she would not be seen. He pulled out his Colt and held it down alongside his leg. He opened the door. “Can I help you?” he asked, appraising the two men standing outside and noting there was a saddled third horse.

“Ain’t very neighborly of you.”

“I ain’t a neighborly sort of fella. I don’t know you, and I ain’t very friendly with men who come poundin’ on my door for no reason.”

“Need to get out of the cold for a bit.”

“Kiowa is only a couple miles that way,” Tanner said, pointing.

“Actually, we’re trackin’ a Cheyenne. A woman. Thought she might be here.”

“Why would you think that?”

“You’re the only place around, and we thought we saw some wagon tracks.”

“Look, mister, we won’t abide a man hidin’ an Indian. Now let us in there to check. You’re tellin’ the truth, we’ll be on our way.”

“No. What you’re gonna do is get the hell off my property and leave me alone.”

“You leave us no choice.” He started to push his way inside.”