The six Blackfoot warriors had appeared out of nowhere, charging down the sloping riverbank. As usual, Dobson was wading in the fast-rushing stream, fishing out the traps, freeing the drowned beaver and flinging them onto the bank before moving on. On the bank, Witherspoon would quickly and efficiently slice the pelt off the animal, cut out the castor glands and toss the bloody carcass away. From his higher position, Witherspoon was the first to see the Indians. “Waugh!” he grunted. “Cache, boy!”

But it was too late. The first arrow caught Dobson in the fleshy part of the thigh. “Damn,” he gasped through clenched teeth. He heard Witherspoon’s gun go off and saw one of the Indians tumble dead to the ground. 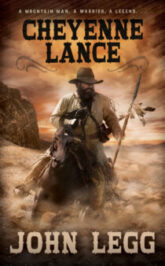 Dobson flipped up one of his pistols and fired. He wrenched the arrow out of his leg and splashed sloppily through the water hoping to make it to the bank and his rifle, and maybe even the safety of the cottonwood trees along the bank.

Witherspoon’s gun boomed again, and Dobson clambered up the muddy bank, snatching up his rifle. He dived behind a tree. Taking a few quick breaths, he edged the gun around the tree. Two of the Blackfeet were dead, but the other four were closing in on Witherspoon.

“Damn,” Dobson shouted as he saw one of the warriors strike the old man with his coup stick. He fired, and the Indian fell. As he hurriedly reloaded, he heard Witherspoon’s cackling laughter.

An iron-shod lance caught Jeremiah in the chest, pinning him to the ground. Grimacing in pain, the old mountain man pulled out one of his big pistols and fired wildly.

Laughing, the feathered, nearly naked warrior who had thrown the lance slid off his horse, a scalping knife in hand.

“No ye don’t, ye red devil” Dobson screamed. “Ye ain’t takin’ my friend’s hair, ye son of a bitch.” He fired the rifle on the run, hitting the Indian in the back.

The other two Indians gave it up. Wheeling their horses, they raced off, splashing across the stream.

Dobson ran to his friend. As gently as he could, he pulled the long spear from the old man’s body and tossed it aside. Witherspoon coughed, spraying blood. He drew a long, deep, ragged breath. “Wall now, ol’ Zack,” he wheezed. “This coon’s finally gone under. Nary thought I’d see the day.” He coughed again, crying out with the pain.

“Hell, boy, this, hyar’s damp powder, or I wouldn’t say so. I kin hear them heavenly angels singin’ already.” He paused, trying to catch his breath. “And I been around a right long time. More’n sixty year all told. An’ I raised my share of hair now, certain I did.”

He fell silent. Dobson thought he had died. But he saw the shrunken, blood-covered chest struggle feebly. Witherspoon’s eyes opened, but they were glazed. He felt around, looking for something. “Whar’s my rifle, Zack?” he asked faintly.

Witherspoon’s withered fist closed around it, and he sighed. With one more great effort, he opened his eyes and focused them.

He held the rifle out to Dobson. “Hyar, now, Zack. I want ye to have this.”

Dobson started to protest, but Witherspoon stopped him. “Ye jist do as I say, boy. I’m gone under fer sure, an’ thar ain’t nothin’ neither ye nor the Almighty kin do fer me now. I’ve seen shinin’ times and starvin’ times, and I’m goin’ under the way a real mountaineer should.” He paused, sucking in wind. “Ye been a good partner, boy, ye have. Ye been right fair with me an’ done more’n your share of the work. Ye been almost like kin to me, and there ain’t any other person I’d like to have this firestick more’n ye. She’s old, but she still shoots plumb center. I call ’er Thunder.”

But it was no use. The old trapper was dead. Sadly, Dobson closed the old man’s eyes, then gently placed Witherspoon’s body across the saddle of his horse and went back to camp. Dobson grieved, but death in the mountains was common, and little was made of it. Those who were close friends mourned. But the ceremony was over quickly and simply. Life had to go on.